Ukraine informs OSCE about system of political, economic and military management of occupied territories
Russia’s hybrid war in eastern Ukraine has been bleeding for seven years now. Attempts to heal this wound and bring peace to Donbas have been going on for about the same time since the first peace treaty was signed by representatives of Ukraine and Russia in Minsk on September 5, 2014. However, negotiations on a peace settlement, despite Ukraine’s readiness and political will to do so, are still being dragged out on many issues.

The main reason behind the lack of progress is the position of the Kremlin, which refuses to recognize its role in the conflict. They say that Russia here, in general, acts as a mediator or even a peacemaker and there are independent “republics” in Donbas so the Ukrainian government needs to negotiate. All this, in addition to avoiding official recognition of the war being waged against the neighboring country, is aimed at “inserting” Moscow-led entities into Ukraine, preferably a federalized Ukraine, and then using them to influence the processes and direction of development of the whole state.

Officials in Ukraine have been saying since the beginning of the war that the so-called “DPR” and “LPR” are mere screens of the Russian occupation administrations, trying to convey this fact to the international community. In particular, Vadym Skibitsky, a representative of the Main Intelligence Directorate of the Ukrainian Defense Ministry, spoke in an interview with Ukrinform about four verticals of Russia’s management of temporarily occupied territories: strategic control through the Russian presidential administration, economic management headed by the Russian deputy prime minister), the vertical of special services (primarily the FSB), and the military vertical, which is closed at the General Staff of the Russian Armed Forces.

The Permanent Mission of Ukraine to the International Organizations in Vienna has recently made a detailed presentation on this issue to diplomats of 57 OSCE countries at a meeting of the OSCE Forum for Security Cooperation.

“Russia has created a system of government in the temporarily occupied territories of Donetsk and Luhansk regions, which provides full control over the activities of the Russian occupation administrations and minimizes their adoption of any independent decisions. The curators of these processes are the relevant structures of the presidential administration, government, and law enforcement agencies of the Russian Federation,” the Ukrainian delegation said, starting its presentation.

The main decisions regarding the domestic political situation in the temporarily occupied territories of Donetsk and Luhansk regions are being worked out by Russian presidential aide Dmitry Kozak who in February 2020 replaced Vladislav Surkov, the previous curator of the Ukrainian direction in the Kremlin.

Kozak is now the main representative of Putin’s will in the Normandy talks and oversees the Russians in the Trilateral Contact Group. He is assisted in his work by the subordinate department for cross-border cooperation of the Russian presidential administration (headed by Alexei Filatov).

Kozak is known, in particular, for initiating the settlement of the Transdniestrian conflict on the basis of Moldova’s federalization in 2003 – the Moldovan leadership was able to repel the plan imposed by Moscow at the last moment, just before signing the document. Now he is trying to turn Ukraine into a federal state, with the Russian enclave inside. 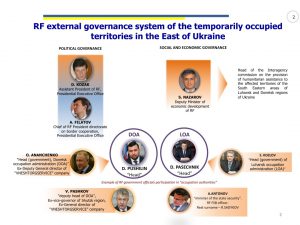 In the “LPR/DPR” system, Kozak can be called a kind of “president” who determines the “principles of domestic and foreign policy” and is responsible for “implementing the strategic course of the state,” whereas the functions of the government are performed by the “interdepartmental commission for the provision of humanitarian aid to the affected southeastern areas of Donetsk and Luhansk regions of Ukraine.” This body, set up by the Kremlin in December 2014, is responsible for making decisions concerning the socio-economic aspects of the temporarily occupied territories. According to Ukrainian military intelligence, Vneshtorgservis CJSC was also established in certain districts of Donetsk and Luhansk regions to directly manage the economic component.

The chairman of this “interdepartmental commission,” which includes deputy heads of ministries, departments and services of the Russian Federation, is the First Deputy Minister of Economic Development of the Russian Federation. Today it is Sergey Nazarov, who replaced Kozak. The latter was transferred closer to Putin, from economic to political control of the occupied Donbas.

Such a structure of Russia’s political and economic management of the occupied Donbas operates “in the shadow regime.” “Managers” on the ground are puppets Denis Pushilin in the so-called “Donetsk People’s Republic” and Leonid Pasechnik in the so-called “Luhansk People’s Republic.” These Moscow-controlled puppets announce the messages the Kremlin needs, and the Russian leadership is promoting them as “partners for dialogue” with Kyiv.

The other two puppets depicting the role of heads of “governments” in “DPR” and “LPR,” the fictitious quasi-state formations created by Russia in Donbas, are Alexander Ananchenko and Sergey Kozlov, respectively.

It is unknown how much it costs Russia to maintain the occupied territories, including military spending. According to various estimates, it could be $2-4 billion a year.

“The decision-making process by representatives of the occupation administrations is formal. The practice of receiving instructions from Moscow during the visits of the occupying authorities to the Russian Federation continues to be used regularly,” the Ukrainian mission to the OSCE said.

In addition, the structures of the Russian Foreign Ministry are involved in the formation of the “international legitimization of quasi-republics.” As a rule, the Russian Foreign Ministry, through controlled institutions and Russian agents of influence abroad, organizes support for various types of information and propaganda campaigns and actions, as well as tries to involve the so-called “representatives of the Ministry of Foreign Affairs” of quasi-republics.

The controllability of the processes in the temporarily occupied territories of Donetsk and Luhansk regions is ensured by continuing the practice of approving personnel appointments in Moscow, forming bodies and structures according to the Russian model, bringing the activities of quasi-republics in line with Russian standards (including “DPR/LPR” special services),” the Ukrainian delegation said.

One of the mechanisms of control of the occupying power is the appointment of Russian officials to key positions in the temporarily occupied territories of Donetsk and Luhansk regions (in particular, “Deputy Prime Minister of the DPR” Vladimir Pashkov is a former Deputy Governor of the Irkutsk region; “Minister of State Security of the LPR” Anatoly Antonov is an FSB officer, real name – Rashid Sadykov).

The command and control system in the temporarily occupied territories of Donetsk and Luhansk regions of Ukraine is fully integrated into the control system of the Russian Armed Forces and is built according to the scheme: General Staff – Southern Military District (Rostov-on-Don) – an Operational Group of Russian Occupation Troops.

As for the operational structure, this grouping has two echelons: two army corps in “DPR” and “LPR” being in the first one, and the 8th Army with allocated reserves being in the second one. The grouping’s total strength reaches about 58,000 servicemen. 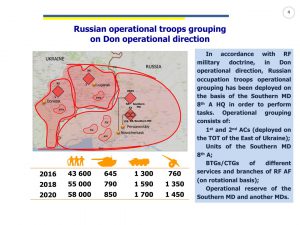 Both army corps included 35,500 people as of November 2020. The staffing of these corps is up to 80%, but they are over 95% equipped with weapons and military equipment. In the temporarily occupied parts of Donetsk and Luhansk regions there are about 480 tanks, more than 910 armored vehicles, 720 artillery systems, and 210 multiple-launch rocket systems. 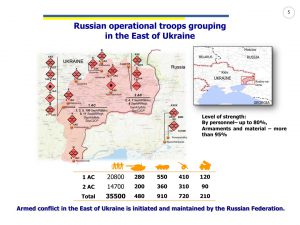 According to the Ukrainian delegation to the OSCE, Russia has equipped the occupying forces with basic models of weapons and military equipment, including modern Russian developments.